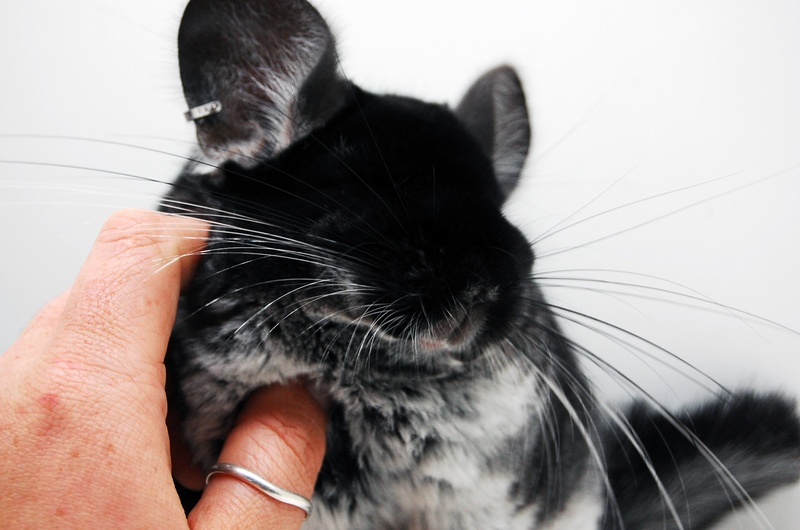 Females: There is a possibility that certain females can projectile spray urine up to 6 ft. Not all females spray, maybe 10% of them.

Males: You will need to perform a hair ring check at least once every 2-3 months. Most males will clean themselves and take care of it, but some males are lazy and will allow fur to accumulate. This means you have to pull their penis out of the sheath and remove the hair.

Temperament? Both can be equally be territorial or bad tempered, it has nothing to do with male/female, regardless of what you may have read on the Internet. Each individual chinchilla has a different personality, it's not based on their gender.

Something that I want to point out to those of you thinking of purchasing a chinchilla as a pet who may have read on the Internet to buy the youngest you can get because you can raise and "tame" it. I get asked in nearly every single potential customer e-mail or text now - "Do you have any babies for sale?", followed by "What is the temperament?". Well - this is when I send them here.

For a 2-3 week old baby - not a chance that I can give you a clear answer on this.. do you realize that this baby hasn't been weaned yet? Would you ask a human mother how their 2-3 week old child will be as they grow up?

For an 8-10 week old baby - Still can't answer this. The animal has just recently been weaned, is changing their diet, moving to another cage and everything feels different for them. They haven't hit the terrible twos yet either, you have to wait for it. What are the "terrible twos" you ask? Well, think of a toddler who won't listen to you, cries, gets into everything - that's a chinchilla in their terrible two stage. You can get occasional nipping, rebellious activities, pushing you away, increase of cage surfing, there does seem to be a difference in animals during this stage. Some go through it, some don't. Getting an 8-10 week old baby DOES NOT guarantee that your raising the animal from a young age will create a well tempered animal in the end.

For a 3-5 month old - Well, most likely they're a full blown hellion by now, but they'll calm down after they get out of the "terrible two" stage. This is usually the worst of the worst when it comes to temperament, as mentioned above. So if you want to buy an 8-10 week old baby, know that you may go through a couple months of this stage - it doesn't mean that they'll stay this way either.

Older than 6-8 months - At this point, you should have the basis of temperament in your animal, they should be calming down at this stage. Chins react differently with each human being and in different environments. How they react with me doesn't mean they're going to react the same with you. I've been handling chinchillas A LONG TIME. I can tell you if they're easy to handle for me and if they bite, but just because I can handle them well doesn't mean that you're going to in the beginning or that they can't change either. It could take a good month for them to settle down in their new environment which means leaving them be and not handling and slowly introducing yourself through the cage bars to the animal. A change in environment can create a change in temperament - so you have to give them time.

I had a customer come from WV to pick up a chin that I warned her about and offered to refund her due to the temperament of this chin. Beautiful white female I'd been holding onto for a while because she reacts so hateful to me in her cage. She's a cage surfer, a cacker, goes crazy nuts in the cage and hates when I walk by. I've never held her much at all. When she got into my hands while the customer was here, it was like she was a total baby - completely different animal than I had experienced in the past. She didn't really move at all, didn't try to pull from me, turned into a total sweetheart and I was shocked. She was almost letting me put her on her back.. she was accepting belly rubs. With the customer, she pulled away from her, but wasn't wild, just scared.

So - with that being said - a chin's temperament changes throughout it's life and you can't judge it based on holding it one time or how it may react with one single person. While it's OK to ask if the chin is a biter, sprayer, hateful, etc - give the animals a chance to get accustomed to you no matter the case. I've had chins come here that were supposed to be completely hateful and I never had a single issue with them, and then I've sold chins that were super lovey towards me and then the new owners completely disagree. With time, love and care, all chins can make great pets - you just have to have patience.